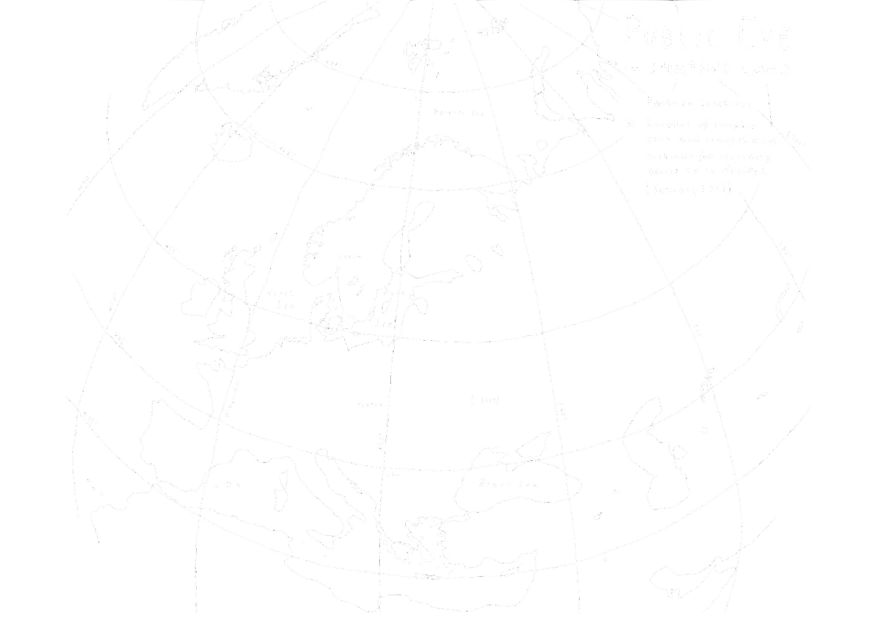 Public Eye is a collaborative art project in a development phase.

In this project, a recording device will be constructed to contiguously capture audio, video, and weather data in vast, remote or limited access-landscapes with complex geo- and sociopolitical histories. The device will record from one geographical site for an entire year.

All captured material will be made available for invited artists of any media to create their artworks from, yet relating to the thematic content and involving strategies of durational time, to open the location through these different perspectives to the public by sharing its presence and observations.

While hearing is omnidirectional, a gaze is directional. Living species continually record their surroundings. Being in a landscape, a perceiver scans for qualities, for opportunities. ‘Landscape’ means to create, shape or form land. A gaze is a charged space: a space for sharing, for encounters, for the execution of power and surveillance. Through perception of landscape, the mind interprets it and forms ideas of it and creates a combined image of its constituents. And it becomes the space, the backdrop, for memory and understanding. Landscape geographer Kenneth R. Olwig says that “[t]he land is bound by custom, but the land also binds the memory”. Whereabouts shape the perspective, exceeding a human gaze, affecting understanding, in turn influencing new knowledge. Also, language frames reasoning. A “desolate” landscape, for example, is not ’empty’ merely by humans not being there. Humans need common concepts to get oriented in the world. Humans need common concepts to navigate global public spaces.

The global political challenges of the Anthropocene confront us partly because of how they exceed our perception in a similar manner: Climate changes, pandemics or social and economic effects of algorithms or propaganda are difficult to observe. Their distribution in time and space make them demanding to collectively grasp, share and deal with. The geopolitical situation in February and March 2022 is a terrifying demonstration of how the current human energy supply eco system, dependency on nuclear energy and sustainable climate are inherently global questions that require global public spaces in which peaceful solutions can be negotiated.

What is a public space in today’s globalized world? How do we constitute a common ground where we can negotiate political challenges?

The concept is to create meaningful relations with a remote landscape – and to explore how such remote landscapes may be made subject to collective attention from a wider public.

In the process of researching and selecting a site for the recording device we are looking for several qualities. In addition to complex geo- and sociopolitical histories where something has been at stake, is at stake, or may be at stake in the future, the effort for global greening and energy production should preferably come into play. Sites of such histories with a remote quality at some level and of limited access to a wider public – and therefore difficult to convey – are key to the concept.

Finally, we inquire sites of vast space that from a human perspective are characterized by desolation. They provide some kind of scale, slowness, extended time, perhaps monotony or even boredom to a human perceiver – factors that may increase ability of awareness and presence. The extreme durational choice of recording for a period of one year contiguously could create a zone where new qualities emerge, “a special intensity of attention”, as filmmaker Andrei Tarkovsky puts it.

Researching locations for the recording device to be placed and acquiring access is fundamental to the project and will be conducted in collaboration with the partners. We hope, with establishing Public Eye, to be able to develop the project further at several locations in the future.

Public Eye is a collaborative art project created by composer Knut Olaf Sunde. Public Eye will facilitate a socio-geographical distribution of all captured audio and video material and weather data through inviting four artists of any media through collaborative partners in Sweden, Serbia, Poland and Norway to interpret and create their new artworks, in response to the thematic framework and engaging with time as material.

As one of the artists, composer Knut Olaf Sunde will transform transform the captured material to a one-year durational soundscape and video installation with symbiotic extensions of live musical events informed by and taking place on symbolic dates connected to the geopolitical location of the recording device.

Similarly, scholars are invited to present and react on the process and results and contribute to a discursive practice. Collaborators or festivals are invited to contribute to the facilitation of artistic exchange and presentation. By subjecting the material to collective use, shared spaces will emerge that might set social borders and energies in motion. Being able to watch, to hear and to perceive a variety of interpretations in an ecosystem of artistic presentations will, we hope, yield better understanding and a sense of common ground.

In 2021, a pilot project phase 1 was conducted in collaboration with Notam and Wilmers Instruments AS. An artistic prototype for an installation from this phase is in progress.

In 2023, a pilot project phase 2 is ongoing, to streamline procedures and enclose equipment for protection. In this phase we assume power supply from the grid.

Two examples of location typologies are given below.

As the first project proposal was formulated in 2020, prior to the Russian war on Ukraine from 24. Feb 2022, the idea was to have the recording device at the previous nuclear testing range for the hydrogen bomb “Big Ivan” (1961) at Novaya Zemlya, Russia. Due to the current geopolitical situation, this location is not a viable alternative for the foreseeable future. However, it is possible to imagine Novaya Zemlya as a location in a post-war Russia as a future development of this project. Furthermore, the reasoning informs the project and is therefore included below.

The arctic Russian archipelago Novaya Zemlya was a nuclear test site, where the hydrogen bomb nicknamed “Big Ivan” was detonated in 1961. That year, U.S. President Kennedy took office in January, in April the U.S.S.R. sent Yuri Gagarin as the first human in space, some days later Kennedy ordered the ill-fated Bay of Pigs invasion of Cuba, then in May announced so send a man to the Moon by the end of the decade, to turn public opinion. Tension of West Berlin access increased from June. In July chairman Khrushchev of the U.S.S.R gave three months to finalize a project on the biggest bomb in history, to “show the Americans what we can do.” The tension of Germany increased with the construction of the Berlin Wall from August. Then, the “Big Ivan” bomb AN602 was dropped on 30 th October at Novaya Zemlya, to demonstrate the ability to extreme power. That event is thus a focal point to the tension of cultures, borders and security in Europe. What if it would be possible to capture a sensation of that vast landscape, and evoke an impression of the enormous forces revealed, its political repercussions and its potential consequences if actually used?

Another possible location being considered is Hopen, a small isolated arctic island in the archipelago Svalbard, Norway. Located in the Barents Sea at 76,5° N, it hosts a meteorological station, staffed by four people. Hopen is covered by The Treaty of Svalbard from 1925, although stating full Norwegian sovereignty, also quite uniquely secures equal treatment, rights and duties of public and commercial interests for all signature countries and their peoples, as well as regulating demilitarization. Today, there are both Russian and Norwegian settlements at Svalbard, peacefully coexisting. At Hopen topography, wildlife and weather are the players; humans play a minor role, modestly observing, although overlooking a risk of future contamination of the ecosystem from about 18,000 radioactive units, including spent nuclear fuel, dumped in the Arctic Ocean from the 1960s to the 1980s, in particular along the coast of Novaya Zemlya. As an almost unreachable outpost in the arctic, far north of mainland Europe, Hopen is marked by its own extreme topographical logics and a rare geopolitical balance.

Pilot project funded by Nordic Culture Point (2020 and 2022) and sponsored by Wilmers Instruments AS and Amptec bvba. The project is in the process of applying funding from a.o. Creative Europe.

The recording device is under development. Below is a descriptive sketch from August 2021. Considerations of technical, practical, artistic and financial nature as well as power supply, compactness and ruggedness must be balanced to create a viable rig.